the electron to higgs boson

Timeline – from the discovery of the electron to the Higgs boson* 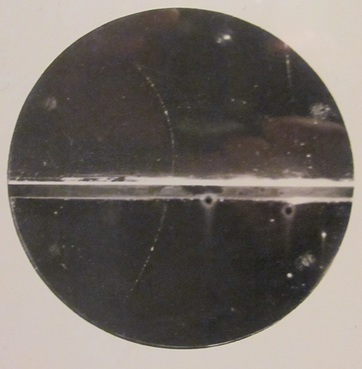 The Anderson photograph evidencing the existence of antimatter. The faint track crossing the chamber provided the first evidence for the positron, the antiparticles of the electron. Source: Science Museum London’s LHC exhibition on display at the Powerhouse Museum Sydney, 17 August 2016.

As Gavin Hesketh explains:  «A charged particle changes direction as it flies through a magnetic field, leaving a curved track in the cloud chamber.  Positively and negatively charged particles will curve in opposite directions (bending left or right, for example), and slower particles will curve more than faster particles, allowing much more information to be extracted from cloud-chamber photos”.  A modern-day corollary is that huge powerful magnets are a key part of almost every modern particle detector for the same reason: the electric charge and momentum of a particle can be determined by measuring the curve in its path. [3]

[1] This is also described in some detail by Gavin Hesketh’s The Particle Zoo – The search for the fundamental nature of reality, Quercus, Hachette, 2016, 52-53.
[2]  Also vividly described in ibid, 53-59, including how to make one and how it works.
[3]  Ibid, at 61; and at 36: «‘a negatively charged particle travelling backwards in time turns out to look identical to a positively charged particle travelling forwards in time».